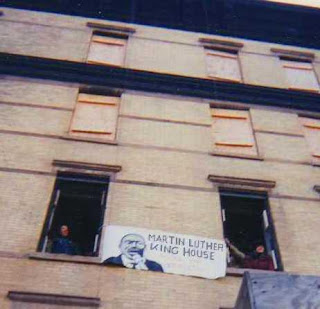 In January 2000, working with a coalition of downtown Lower East Side squatter activists and Al Sharpton's National Action Network, I helped organize the occupation of a vacant and neglected city owned property in Harlem. The action was held on a Martin Luther King's birthday rather than on the holiday named for him. The event began with a march from the National Action Network headquarters through the streets of Harlem. Al Sharpton marched in front and participants including locals waved black and red anarchist flags. Our route took us to a building that had already been occupied. When we arrived the windows were thrown open and banners lowered to applause.

The NYPD and their special services officers moved in quickly and arrested those inside. After an hour or two the building was resealed and the action was over. Next came jail support. I don't know if the press paid any mind to what happened, but the day's action was one that I would keep in mind, especially in 2009 when Picture the Homeless organized a strikingly similar event hoping for better results, but not doing much different.
Home