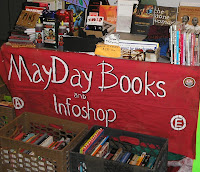 Through my relationship with Honna V. and a number of other organizers I had previously worked with at Blackout Books, I became involved with May Day Books in late 2001 and early 2002 as the collective planned the Intergalactic Anarchist Convention. The gathering was a four-day-event that attracted anarchist minded folks from around the world shortly before the World Economic Forum was scheduled to be held in NYC. The Convention was held in a large donated storefront on 42nd St. just within sight of Time's Square. Despite some unresolved personal conflicts amongst other collective members prior to the event the entire weekend went amazingly well and was a surprising success.

After the convention and the protest that followed it, I took my leave of NYC for a time and made my way down to the Earth First Organizers Gathering in Arizona, somewhere between Phoenix and Tucson. I then dropped in on some NY friends who had relocated to Austin, Texas and founded an activist community center and living space in a warehouse they purchased called the Rhizome Collective. There I spent most of my time recovering mountains of wasted health food and helping with the Inside Books Project that sends free literature to Texas state prisoners.

After a few lovely weeks in Texas I met up with a group of traveling puppeteers from Vermont and North Carolina. Together we made our way up to Asheville where I met up with Honna, and then to a Catholic Worker Farm not too far from Richmond Virginia. After a few days on the farm Honna and I took a ride to Philadelphia and from there made our way back to NYC.

Back home for the Spring I threw myself back into local anarchist organizing efforts. At the time the May Day Books Infoshop was only open very limited hours three days a week. As someone with a lot of free time I proposed a new seven-day schedule and committed to covering shifts everyday if need be. To make the new schedule sustainable I began recruiting new volunteers among those new to organizing. I also began a personal zine archive and copied dozens of titles free for the store and for my friends at the feminist Bluestockings Collective on Allen Street. I helped with ordering new titles for the store and began tabling at events, especially but not limited to punk music shows were I knew there were many like minded, but not necessarily so politically active people. I began Promoting May Day through the NYC Free Events Calendar. There was even an attempt by some elements in the collective to co-opt the Free Calendar and make it a project of the store, but since these people were not interested in actually putting work into the project that effort was easy to resist. 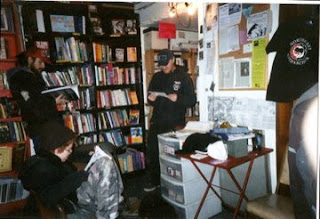 May Day was in a way a very valuable organizing space that was greatly utilized during the lead-up and following the 2003 invasion of Iraq. Thousands of protest fliers and NYC Guide to War Profiteers were stored at and distributed from the space. In the late Spring of 2003 I once again took a break from NYC and made my way across the country to Portland Oregon. Along the way I visited local anarchist collective spaces and made copies of zines both for them and of materials that I did not have in New York. I spent my time in Portland, continuing this and helping out with the local books to prisoners program. 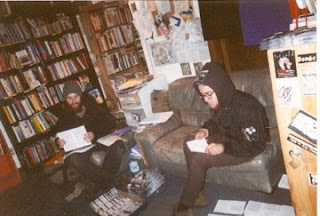 Upon my return home that August the May Day Books Collective had changed drastically. A sectarian divide had formed and strict rules were implemented that excluded a number of longtime but less involved or less consistent volunteers from having a voice in decisions. A faction had formed and were calling for the Infoshop to become a strictly "union shop" under the organization of the Industrial Workers of the World, known commonly as the Wobblies. As a result of this and due to a lack of agreement about the space being a sober or even non-violent space (in the sense that we would agree not to use violence amongst each other) I along with others parted ways with the collective.

I continued to support and promote the space through the NYC Free Events Calendar but was glad to move on personally. When I joined the collective they were going through a split in which half of the volunteer base left. I was part of another similar exodus in 2003. There was at least one similar split after I left the store. Sadly two years later the store was forced to close due to a violent incident fueled by alcohol and machismo. Internal conflict seems to sink nearly as many anarchist efforts as ones that fail due to external forces. Effectively addressing conflict within our organizations and communities is one of the most important things we are going to need to learn to do in order to be successful.
Home