It was during my time in the Mars Garden back in 2001 that I began to first take notice of the huge and interesting looking empty building known as C.U.A.N.D.O.. At the time I learned that the building was occupied, but by a single individual who claimed ownership and who likely wouldn't be friendly to a squatter like myself. It wasn't until the Summer of 2002 that I learned from Kate Millet, who lived next door to the massive structure, that Sifu Jai, had moved out (not voluntarily) and that the building was now empty. Kate was herself fighting eviction and there were attempts to relocate her to another much smaller residence. Kate had two entire floors of a tenement building on the Bowery and paid next to nothing in rent. The force that sought to remove her was the same one that had already displaced Sifu.

From Kate's, I went to find my friend Michael Shenker who I had worked closely with in the fight to save community gardens, organize anti-capitalist protests against the IMF and World Bank and who had aided me with previous squatting endeavors. At some point before moving into Seventh Street Squat Michael lived at and was the choir director for C.U.A.N.D.O. (this was confirmed by old programs we later found in an office in the building.) We met at a September 11th Memorial Vigil in Washington Square Park where he drew me a map that showed an easy access point to the building, which involved scaling the fence to the Liz Christy Garden, climbing onto a shed, and slipping into boarded up but only partially secured window on the second story, all without disturbing the beehive next to it! 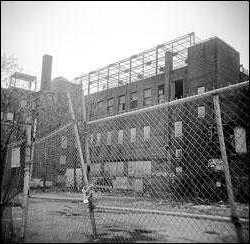 The first night in the building I was joined by my friends Tinder and Oona. We spent much of the night exploring the massive building before heading to Brooklyn where we went to Oona's. I located my sledge and we made giddy plans for the following night when we hoped to create an easier point of entry.

Creating a more convenient doorway to our new home was more difficult than expected since we took many precautions to do so quietly and discreetly, but by dawn we our efforts had proved successful and we could come and go without too much effort. The first entry point we used was a set of doors with a chain through them behind a cinder block wall. The wall had a 3 by 2 foot hole busted out of it and we leaned a piece of wood in front to hide it.

Already by night two, our household had grown with the addition of Joyce Leslie, and soon after Nif who had for a time lived with me at the Purple House. It took us weeks to explore the whole house thoroughly and still every few months we'd fine some previously unknown room or passage way. In those first few months we painted walls, cleared away debris, gathered supplies, and by mid-October had electricity running throughout our living space and no longer had to go outside for water. We even briefly had a working telephone line! Going into winter some of the previous residents had left NYC and others like Cody, Hitaway, Pauly, and Nacho (Dan) took places. By the new year regulars included Aron "Vomitbus," Bonsky, Danica, and Pauly. There were also a number of regulars like Sarah "Ketchup," Grainne, Perry, Andy Gunn, Seth Carolina, and Panda some of whom regularly spent nights at the KFC and helped to maintain the house and community that surrounded it. This squat unlike most others I am familiar with was different in that it was founded and inhabitated by activists. There wasn't ever a lot of alcohol in the house nor did we have any problems with harder drugs. 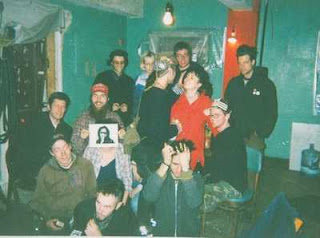