In sixth grade I learned about the concept of homesteading or squatting and I knew immediately that that was what I wanted to do. I watched a video in class (as I remembered it had nothing to do with anything we were studying) about homesteaders living in the wilderness of Alaska, It wasn't something I became obsessed with or was always certain about but it was something that stayed in my mind, and something I went so far as to research on my own as best I could via my local public library. I was unable to find much on the subject other than a video made by a group of activists in Philadelphia. This offered me an urban, less hermetic vision of a life, potentially outside the system that appealed to me.

After finishing high school I moved to NYC and before long made connections with people from the local squatter scene. Through working with Food Not Bombs at ABC No Rio I met Ben from the Bronx who organized another Food Not Bombs there. In October 1999 he took we on a tour of the Bronx which included Rincón Criollo Community Garden, and Casa Del Sol, where I would later live. Another squatter I met went by the name of Okra. He was a large imposing character with naturally red hair shaved on the sides and a bushy beard. I first remember him playing music from a saw in Blackout books. Okra like many of the other squatters I'd met was very friendly and encouraging. He helped me understand that all the culture, history, politics, and how-to-zines not withstanding, squatting is as simple as going into an empty building and sleeping there. Okra knew about a previous and unsuccessful attempt to squat what was Adam Purple's house on Fosyth St. He recommended that I consider that and together we found allow the front door and all the windows on the bottom two floors had been cinder-blocked up, the basement back door was open.

I had been reading all the back issues of World War 3 Illustrated that I could find amongst my friends, at Blackout Books or in the ABC No Rio zine library. It was also around this time that World War 3 co-founder Seth Tobocman's second book War in the Neighborhood came out. I read it cover to cover at Blackout. The subject matter of these was often squatting in the Lower East Side, and the stories were by people with years of experience. Not everything I learned from these elders who opened building in the 80's or early 90's worked when applied to squatting in 1999 or 2000, but some of what I learned from them was invaluable.

From the start I and those I invited into the house acted as if it was a situation that may last indefinitely ignoring or oblivious the recent history of Adam Purple's lost fight to keep the building and the city's plans to demolish it very soon. We organized work days and went about clearing the plaster and debris off decayed walls and other rubble or garbage from the building. Like many of those living in the bush of Alaska who inspired me my housemates and I lived without electricity, flush toilets, or even running water.

By the end of June there were two of us living in the house when the demolition crew began their work. One of us ran to ABC No Rio and activated the old eviction watch list, that squatters had put together years prior in order to support established squats that may face eviction. In some ways it was a silly thing to do and I am not sure what we'd expected to come of that, but it did bring out some of the more activist minded squatters like Fly and Frank Morales, who became both good friends and allies.

Demolition crews in NYC work slowly. They no longer use wrecking balls, but instead take down buildings piece by piece, floor by floor. The guys taking down our house didn't want to destroy our home nor did they want to have to deal with the police. They weren't going to alert anyone to our presence and they weren't scheduled to return for another five days. That would give us time to move our things out. Other than that it also gave us time to organize a big "Fuck the 4th Squatter Party" on the roof. We made fliers and distributed them at the local activist gathering points and at the squats in the neighborhood. On the July 4th we opened up the front door and literally rolled out a a red carpet we'd found to welcome people in. We had candles on all the landings to help people find their way. It was so inviting that an entire family of Italian tourists who hardly spoke English found their way somehow.

We didn't have much planned in the way of party entertainment but it was still a wonderful success. The building was full of interesting junk and all of it was up for grabs. a crate or two of balls was discovered and brought two the roof. At some point after many of the balls found their way to the street below NYPD Emergency Services Unit arrived. They instructed all to leave and most did but they had no interest in searching the large dark building and making sure. Some even employed their ninja skills to sneak out a back way but the police who responded had no interest in doing anymore than breaking up the party. That and confiscating bins full of composting human waste where tomatoes had sprouted. According to the police they suspected these tomato plants were marijuana, but really their just jealous of our shit. 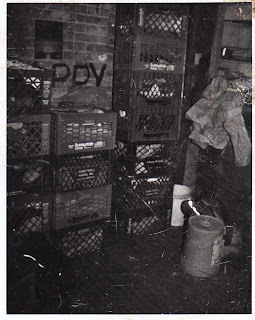