Since the first day of demonstrations I have been part of Occupy Wall Street movement and encampment. During the critical first three days I helped to promote the protest encampment and publicly encouraged others to go and participate, I also helped support the kitchen by delivering cases of food and drinks. Later I helped cooking meals, and coordinating offsite meal preparation and cooking with Grub & the OWS Kitchen. I was involved with starting the OWS People's Library and helping seed it with books and pamphlets along with other members of In Our Hearts. Along with Eric and other librarians I began organizing and Free Literature Table (which was originally a tarp, and not a table.)

In this video you can see me at Liberty Square (Zuccotti Park) folding and distributing anarchist pamphlets and sharing my thoughts on what direction the movement should avoid taking.

In this video for days later I share more ideas about the occupy movement. 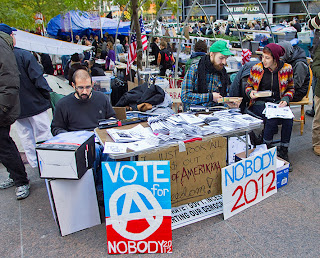 Since the Occupy encampment in lower Manhattan was dispersed in November, myself and those who previously distributed zines requested and received $1500 (with the support of the OWS People's Library) from the NYC General Assembly in order to purchase a cargo bicycle, tables and supplies to continue our free literature distribution efforts. Our request for funds passed unusually without any opposition showing how much support our efforts had garnered within the movement. Since then we have been popping-up all around the city from Brooklyn to Harlem and over much of Manhattan. We distributed well over 100,000 copies of radical publications to interested people. Another part of our outreach efforts are the long discussions we often inspire and participate in.


On March 17th, six months after the Occupy movement began in Zuccotti Park I participated in a march that symbolically relocated the public daily presence of the movement in NYC from the Financial district to Union Square. Occupy Union Square continues to outreach on behalf of the Occupy Movement daily and share information and food with all passersbys and interested parties.They provide an important human role for a movement that is otherwise very much tied to and associated with impersonal internet communication through screens. I along with the In Our Hearts Free Literature table have been working to support and amplify their efforts. We promote the ideas and principals of the occupy movement and an anarchist perspective. After Hurricane Sandy made landfall and brought destruction to NYC and area communities we took some time off from our activities in Union Square to focus on support work with Occupy Sandy.

I still regularly table free anarchist literature with In Our Hearts on the south side of Union Square Park, near Broadway and 14th Street. We also continue to work within the Occupy Movement generally and with Occupy Sandy.
Home